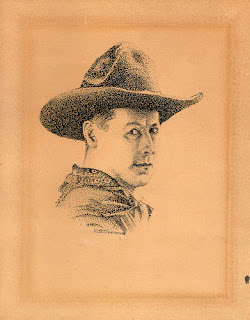 At 17 Hubert joined the Circuit Chautauqua as a tent driver, later progressing to a dancer who specialized in the Russian Cossak.
He lived in Oriental, NC, in a two-bedroom ranch with a large central room that he designed himself. In his small den, where he used a black-and-white TV well into the 1980s, hung a picture of the silent film star William S. Hart. He drew this pointillistic picture himself in the 1920s, and by the time Lee inherited it, it had turned quite sepia and brittle.
Read more about Hubert
Posted by Mabena at 09:54 No comments: Links to this post 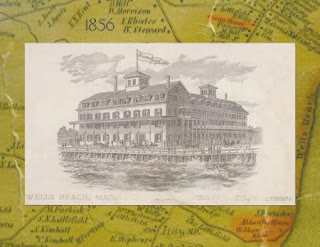 Jeremy H. Titcomb from Great Falls, N.H., built The Atlantic House that opened for business on June 15th 1846. It was located at the present day Gold Ribbon Drive area of Wells Beach. Titcomb sold the Atlantic House to John Horn of Somersworth, N.H., in 1857.
Full article
Posted by Mabena at 15:45 No comments: Links to this post