HONOLULU (AP) — President-elect Barack Obama and his family spent nearly seven hours on Oahu's North Shore, visiting one of his old high school buddies.
Obama's police-escorted motorcade took a two-hour scenic drive Sunday up the island's windward coast from his rental home to the Mokuleia residence of Bobby Titcomb.
Earlier, Obama and two friends from Chicago, Eric Whitaker and Martin Nesbitt, went to the Semper Fit gym on Marine Corps Base Hawaii's compound. The president-elect didn't speak to reporters but made small talk with folks who gathered by the road inside the secure base.
Marines and others on the secure base gathered on a traffic island waiting for a glimpse of Obama.
Afterward, Obama asked the visitors how they were doing and offered a drawn out "al-ohhh-ha." The group applauded.
On the way to Titcomb's house, the Obamas made a brief stop at the Turtle Bay Resort.
Obama and his family are spending 12 days in his native state. The Obamas are trying to keep a low profile on the trip but Obama is receiving national security briefings. He has no public schedule through the New Year.
Associated Press
Posted by Mabena at 14:01 No comments: Links to this post 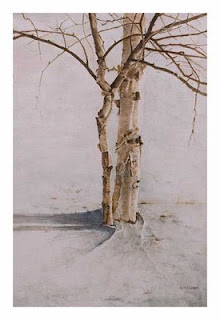 90 year old Clarence Titcombe, is an accomplished wood engraver, printmaker, and painter currently residing with his wife Alma, just outside of Sunderland, Ontario Canada.
He began his life in Egbe, Northern Nigeria, West Africa, where he was born to missionary parents. His parents were British-Canadian pioneers, and the first missionaries to travel into the present day Kogi State in 1908. Clarence’s mother received a citation from King George V for her work with orphans, and his father’s ground breaking work is still honoured today by a school that bears his family name, Titcombe College Egbe. A book has been written about this remarkable man’s work entitled, Tread Upon The Lion: The Story of Tommy Titcombe by Sophie de la Haye.
Biography of Clarence Titcomb.
Posted by Mabena at 10:40 No comments: Links to this post

Sharing news of Titcombs of Hawaii....
Article By Lori Tighe of The Star-Bulletin, about Judge Frederick James Kealiimahiai Titcomb who died March 14th 2000
Thanks to Lei, descendant of Charles Titcomb of Thetford, Vermont. (born in 1805 in Vermont and died in Hawaii in 1883)
Posted by Mabena at 10:23 1 comment: Links to this post Spotted on eBay a letter from JOHNATHAN TITCOMB (1728 – 1817). General Titcomb writes concerning a request for a brigade change: "May it please your Excellency and honors to take into consideration the propriety of dividing the first regiment in the 2d Brigade of the Division of Essex by setting off the towns of Salisbury and Almsbury therefrom to form a regiment by themselves. It is the general wish of the officers and others the inhabitants of Salisbury and Almsbury to be set off and divided as aforesaid, and from their local situation it is fully my opinion of the best and that it will conduce to the good of the Division which I have the honour to Command that the Regiment be divided accordingly…." Signed by Titcomb.
See eBay listing
Posted by Mabena at 08:22 5 comments: Links to this post

Jim has a collection of legal land documents pertaining to a parcel of land in Rowley, Mass, owned, over time, by Titcombs, as well as other prominent Essex County families. There are deeds, mortgages, quitclaim deeds, personal letters, etc. The earliest deed dates to 1858, from Samuel Dummer (of Gov. Dummer family?) to Jacob Smith. Other family names involved in this parcel are Moody, Pingree ( a famous Maine landowning family name?), Towne, Cressey, an 1892 Partial Release of Mortgage from Calvin R. Titcomb to Benjamin E. Towne, Monson, an 1892 Mortgage from Benjamin Towne to Calvin R. Titcomb, a 1911 Quitclaim Deed from Benjamin and Leonora Towne to Hubert S. Titcomb, Sidney Perley ( the publisher of the Essex Antiquarian), Perkins, Sprague, an 1891 Administrator's Inventory for Albert Titcomb, a 1901 Warranty Deed from Benjamin Towne to Hubert S. Titcomb, a 1911 Discharge of Mortgage from Mary F. Titcomb to Benjamin Towne, Ilsley (Newbury fruit and produce dealer), de Rochemont, and a 1911 personal letter from Mary F. Titcomb, Rowley (wife of Calvin R. Titcomb) to Hubert S. Titcomb, Newburyport. I know there is a Titcomb St. in Newburyport. The Rowley property is partially described as being upland and salt marsh, with the Newburyport Turnpike, Ox Pasture Creek and the Rowley River as some of the describing boundary features.
If you have an interest in acquiring such ephemera please email Jim jamesdeanday@yahoo.com
Posted by Mabena at 18:06 No comments: Links to this post Portrait of New Hampshire painter William H. Titcomb (1824-1888)
Found here on eBay
and one of his paintings titled "New England Farmhouse in Winter"
From the Askart website. Posted by Mabena at 13:42 No comments: Links to this post

Clark Titcomb has created a common interest group on Facebook.
This group is devoted to those few who carry the burden of being a "Titcomb"
Posted by Mabena at 09:32 No comments: Links to this post 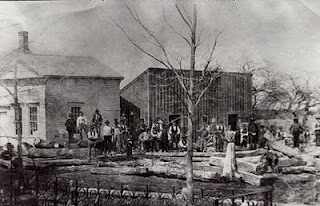 Smith & Titcomb were ship builders of Kennebunk, York County, Maine USA.
The Titcomb shipyard on the River Kennebunk was the last functioning yard at The Landing. This photograph was made from a daguerreotype thought to have been taken in the 1850s. It shows the shipyard's office building on the left.
Info from JURGENS family history
Posted by Mabena at 17:06 No comments: Links to this post 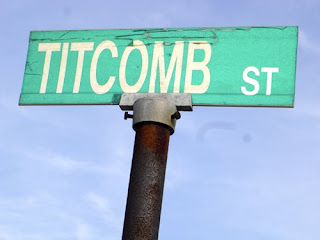 Spotted by musician Liam Titcomb on the last date of his tour in Newburyport MA USA
Posted by Mabena at 12:20 1 comment: Links to this post 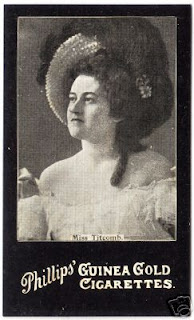 A one guinea gold card from the Phillips Guinea Gold Series issued up to 1902. Actress Miss Titcomb. Spotted on eBay recently.
Posted by Mabena at 09:40 No comments: Links to this post 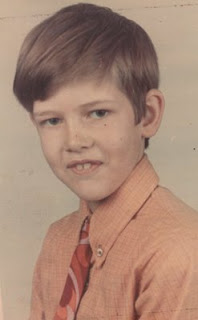 My brother is 48 today and I didn't send him a card!
Posted by Mabena at 17:11 No comments: Links to this post 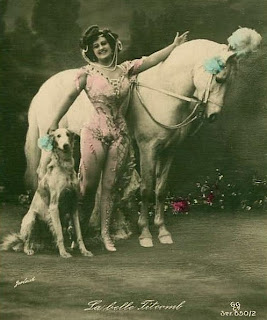 La Belle Titcomb [real name Heloise Willis] was a vaudeville actress, singer and performer . She performed in New York Vaudeville in the early 1910s, where she played at the Orpheum circuit. This photo appeared on Ebay recently.
Posted by Mabena at 17:57 1 comment: Links to this post

Monarchs Acrobatics Gymnastics Club have just finished a round of three weekends of competitions.
The first was the South West NDP preliminaries where Katrina Titcombe, Georgia Green and Nicole Coogan won silver medals.
Full article
Posted by Mabena at 11:14 No comments: Links to this post 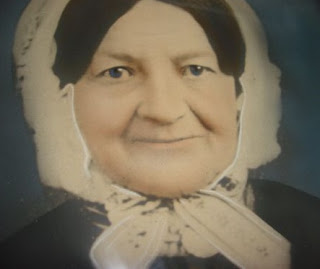 Photo of Nancy Titcomb….Born Farmington Maine 24th May 1787 and died February 28th 1857 daughter of Stephen Titcomb and Elizabeth Henry. Spotted on eBay recently
Posted by Mabena at 12:52 No comments: Links to this post 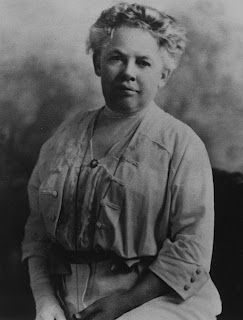 Mary Titcomb was the first librarian at Washington County Free Library and the person who originated the idea of a county-wide delivery of books.
Mary Lemist Titcomb, 1857-1932, was born in New Hampshire, worked in the Concord, Massachusetts, Public Library, later became librarian of the public library in Rutland, Vermont and secretary of the first Vermont Library Commission.
She arrived in Hagerstown, Maryland in 1902 to organize the county's library. She was concerned that the library was not reaching all of the people it could, that to be a county library, as the name implied, it should reach everyone in the county. The bookmobile served to extend the role of the library outside the county seat. She said:
No better method has ever been devised for reaching the dweller in the country. The book goes to the man, not waiting for the man to come to the book.
Original article
Posted by Mabena at 11:19 1 comment: Links to this post 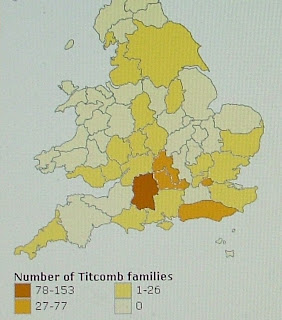 Titcomb Families Living in England and Wales in 1891.
From ancestry.com
Posted by Mabena at 14:57 No comments: Links to this post 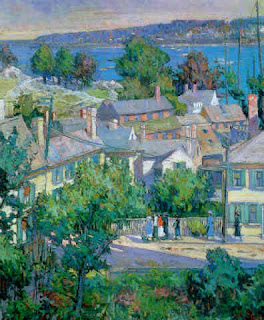 Painting called Sunday morning by Mary Bradish Titcomb
Oil on Canvas 1920 - 1927
Sold at Sotheby's New York: Wednesday, December 1, 1999
Mary was born in Windham, NH 1856. Attended Massachusetts Normal Art School, Boston where she later became Director of Drawing. She Traveled to Europe in 1895
Attended School of the Museum of Fine Arts, Boston from 1902-1909
She died in Marblehead MA in 1927
See more of her work at artnet
Posted by Mabena at 14:40 No comments: Links to this post 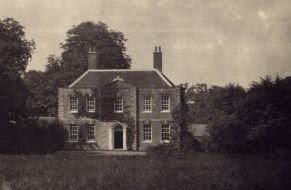 Titcomb Manor, Marlborough, Wiltshire UK
Posted by Mabena at 16:56 No comments: Links to this post

The name Titcomb is Anglo-Saxon in origin a variant of the village name of Tidcombe in Wiltshire England. The Domesday Book refers to 'Titicome'.
Among the early recordings of the name in Wiltshire is the marriage of Elizabeth Titcumb and William Putman on April 26th 1611 in Salisbury, and the christening of Betty Titcumb on January 27th 1750 at Chippenham.
A Coat of Arms granted to the family in 1693 in the county of Wiltshire has the blazon of a gold shield thereon a blue bend between two foxes' heads erased gules. The crest being an arm and hand couped grasping a broken lance gules. The first recorded spelling of the family name is shown to be that of Agnes Titcomb, which was dated February 2nd 1548, at St Andrew's, Ogbourne, Wiltshire, during the reign of King Edward V1, known as 'The Boy King', 1547 - 1553.
From the internet surname database
Posted by Mabena at 16:46 No comments: Links to this post 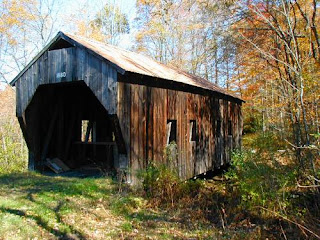 The Titcomb or Stoughton Covered Bridge is a 48 foot long Multiple Kingpost Truss . It carries a foot trail on a farm over the Schoolhouse Brook in Perkinsville Windsor County and was built in about 1880.
Does anyone know which "Titcomb" it was named after?
More details
Posted by Mabena at 15:30 2 comments: Links to this post 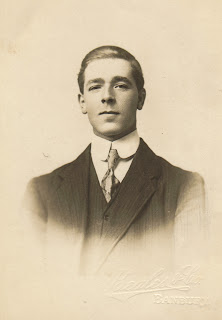 Albert Wood Titcomb born 1892 in Brackley Northamptonshire.
He was a master grocer in Stockshill Silverstone, he died aged 59 on 20th August 1952.
He married Hilda Sarah COLES [born 1893] and they had two children called Jean Margaret and Lilian Mary.
He is my 2nd cousin twice removed.
Posted by Mabena at 16:45 1 comment: Links to this post 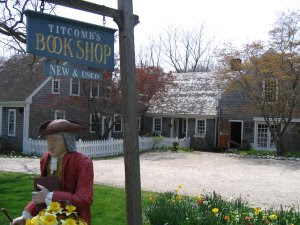 Titcomb's Bookshop East Sandwich, Massachusetts, USA started in 1967 when Ralph and Nancy Titcomb bought a house in Connecticut and found many valuable books and documents in their new home and barn. An impromptu business began when they sold their finds and then launched a mail-order business and had their eight children collating and compiling a catalog. Having stumbled upon the profession of book selling, the Titcombs have stuck with it for more than 35 years. Titcomb's Book Shop still trades in antiquarian books, but it is now also a general new book bookstore.
Titcomb's Bookshop
Posted by Mabena at 16:38 1 comment: Links to this post

Joseph Titcomb, was Ocean Bank's first President
The bank first opened its doors on August 1, 1854 in Kennebunk Maine USA.
Full article
Posted by Mabena at 16:28 No comments: Links to this post 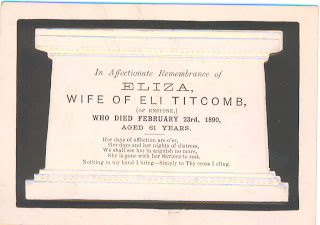 Mourning card for my Great Great Grandmother Eliza
Posted by Mabena at 18:32 No comments: Links to this post