Gordon Titcomb best known as a musician has a book out: The Last Train (Illustrated by Wendell Minor)was published in 2010 by Macmillan/Roaring Brook Press. More details here. 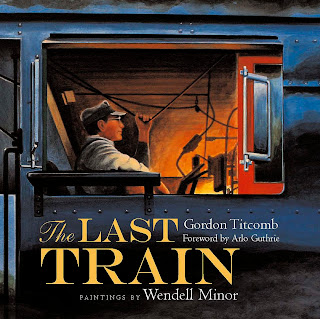 There is a lot of detail on this iconic first USA Titcomb who arrived on The Hercules in 1634 and settled in Newbury then called Quascacumquen.
Early New England People: Some Account of the Ellis, Pemberton, Willard, Prescott, Titcomb, Sewall, and Longfellow, and Allied Families written by Sarah Elizabeth Titcomb
Read it here
Posted by Mabena at 11:59 No comments: 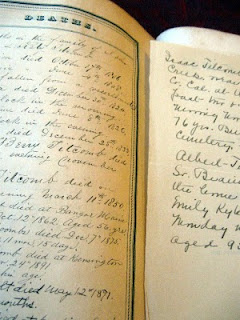 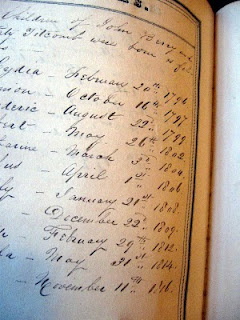 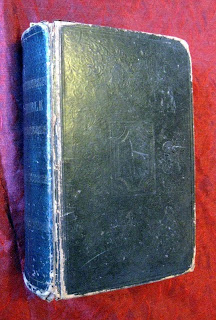 A  bookseller in Stamford, CT in the USA had a Titcombe family bible which is from the Titcombes of Newburyport, Massachusetts and Portland, Maine.  It was published in 1843, and has the family genealogy inside filled out from about 1700's to 1890.
It also mentions one family member who died by falling from the masthead of a ship in 1808!
Bible is now sold.
Posted by Mabena at 15:49 No comments: 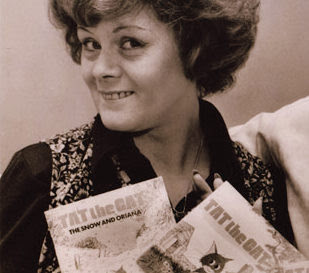 Audrey Titcombe, who has died aged 79, was an ardent socialist and a supporter of all unions, especially the National Union of Mineworkers during the strikes of 1983-84. She was an inspiration to all who knew her.
Guardian obituary
Posted by Mabena at 19:53 No comments:

Barbara purchased a box of some old jewelry and to her surprise found 2 identical gold rectangular early victorian pins (not mourning jewelry but "affection" pins)  with blondish hair braided in each.
On the back of one it says, P Titcomb from her sister Emmeline and the other says E Titcomb from her sister Priscilla.  These 2 names coincide with the daughters of Paul Titcomb, son of General Titcomb  The pin says Emmeline but the Sewell geneology says Emeline..an engravers mistake?
Does anyone  know anything about these 2 sisters or can anyone provide any more information?
Posted by Mabena at 08:17 1 comment:

Frederick James Kealiimahiai Titcomb, a retired District Court judge and former Honolulu deputy prosecuting attorney, died Friday, March 10, 2000 in Honolulu. He was 77. Born in Honolulu, Titcomb was a descendant of early U.S. settlers. He also was of Hawaiian and Chinese ancestry and his great-great-grandfather, sugar plantation owner Charles Titcomb, married into Hawaiian royalty. Frederick Titcomb graduated from St. Louis High School and was a student at Washington State College when the United States entered World War II in 1941. He dropped out of college to enlist in the Army and served in New Guinea and the Philippines. Titcomb earned a Purple Heart and two Bronze Star medals for his combat service. After the war, he returned to Washington State College and then attended Cornell University. He married, and he and his first wife, Norma, returned to Hawaii. The couple would later divorce. The family moved to San Francisco in 1953 so Titcomb could pursue a legal education at the University of California’s Hastings College of Law. To put himself through school and to support his family, Titcomb worked as a warehouseman, trucker, door-to-door salesman and night janitor at Hastings. After graduating, he returned to Hawaii and worked as a law clerk for Judge Jon Wiig. In 1956, he went to work as a city prosecutor, where he won more than 40 consecutive jury convictions. In 1960, Titcomb ran as a Republican against Dan Inouye for a seat in the U.S. House of Representatives. Inouye won by a nearly 3-to-1 vote and two years later was elected to the Senate. In 1962, Titcomb was named a Honolulu District Court judge. In addition to practicing law, Titcomb was a member of the Screen Actor’s Guild and was frequently seen on "Hawaii Five-0." In 1983, Titcomb married Marcia Vander Zicht, who was his nurse after open-heart surgery.
Source 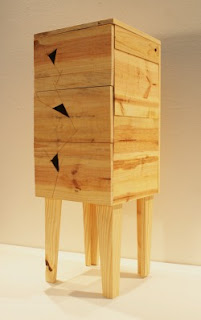 A list of incumbents of the Parish of St. Michael's Tidcombe records a Petrus Oliver de Titecombe in 1347 possibly the first recorded mention of our surname.
Thanks to John Titcombe for the research
Posted by Mabena at 16:41 No comments: 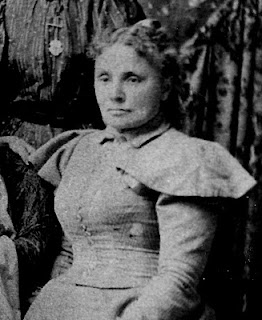 Lovely photo of Lizzie Titcomb, born December 21, 1846 in Bermondsey, London, England. She married George Winterbourne in 1867.
She and her brothers Mark Titcomb [born in 1835 in Hackney] and Edwin Titcomb [born in 1844 at St. John, Southwark] emigrated to the United States in 1870.
They were the children of William Titcomb and Ann Belcher of Uffington England.
Lizzie's brothers, Edwin and Mark both had farms in Kansas after emigrating to the U.S. Mark died in 1880; Edwin in 1920 in Colorado.
Thanks to William for the photo and details.
Posted by Mabena at 11:43 No comments:

William TITCOMB died February 9th, 2010. Father of William West Titcomb, Kari D. Stone both of Myrtle Beach SC, and Douglas S. Titcomb of Denver, CO. Brother of Maurice Titcomb of FL and grandfather of Ashley Stone. A graveside service will be held Tuesday, February 23 at 1 PM at the Forest Glen Cemetery, Forest Glen Rd. Reading. Relatives and friends invited to attend. There are no calling hours. William was a Vietnam veteran, US Army.  Arrangements under the direction of the Douglass, Edgerley and Bessom Funeral home, Reading 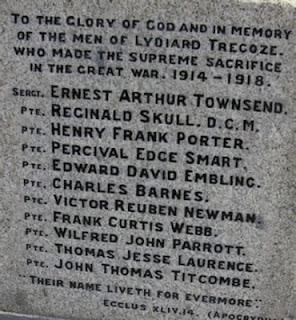 
Song written by Norma Titcomb with help from her father Norman Titcomb
Posted by Mabena at 14:53 No comments: 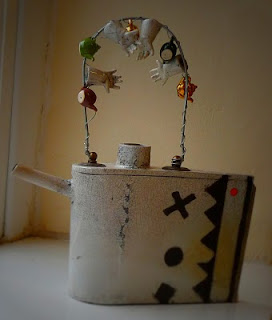 Raku teapot from an exhibition of new work...mainly teapots which were on show at Rock Institute, Rock, Wadebridge, Cornwall from December 20th until January 2nd 2010.
Posted by Mabena at 20:34 1 comment: 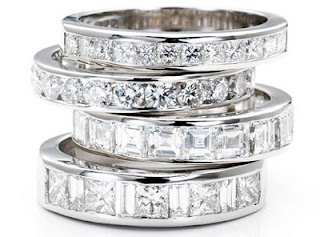 John Titcombe trained at the 200 year Birmingham School of Jewellery and Silversmith. Upon finishing his training he joined a small firm in Bath managing their workshop at 19. After a decade he decided to start his own manufacturing company based in his home city of Birmingham, on Vyse Street in the heart of the 'Jewellery Quarter' trading under the name of Anvers. The inspiration of this name came from the many trips John had made to Antwerp, the diamond capital of the world. Anvers is 'Flemish' for Antwerp.
John Titcombe's website
Posted by Mabena at 20:50 No comments: