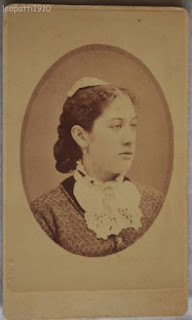 Photo of a young girl with center-parted upswept hair, a white cap on top, wearing a patterned dress with white lace in front.  On the back in green ink "Mamie Titcomb, 15 yrs. old".
Photographer information on the backstamp "Taylor & Preston, 188 Essex Street, Salem, Mass. (Massachusetts)".
Found on eBay
Posted by Mabena at 11:06 No comments: Links to this post 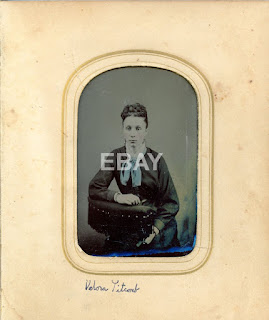 A tintype of Mary Velora Titcomb. On ebay now. She was born in New York in 1851 and was a daughter of Dexter and Ellen Titcomb. The family settled in Fall River, Columbia County, Wisconsin and Velora grew up there. She married Alvin Andrews (1848-1929) on Christmas Day of 1871. Early census records indicate they did not have children but on the 1910 there is a Eugene Andrews listed in the household with them who is enumerated as their son--so I'm not sure. Velora died in Fall River in 1933 and is buried in the Fountain Prairie Cemetery in Englewood, Wisconsin. The photo dates to about the time of her marriage and the image is very clear.
Posted by Mabena at 09:14 No comments: Links to this post