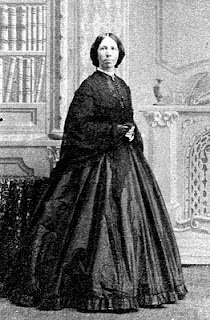 Louisa Titcomb, of Stroudwater, Maine, was only one of at least 14 women from Maine who volunteered to work as a nurse at the Naval School Hospital in Annapolis. She worked there from August 1863 until May 1865, The hospital, appeared on stationary she sent Rebecca Usher in April of 1864. While at the Naval School Hospital, she became editor of the hospital's newspaper, "The Crutch," which was created to keep hospitalized soldiers informed of events.
Taken from "Uncounted Forces: Maine Women in the Civil War" blog.
Posted by Mabena at 10:27